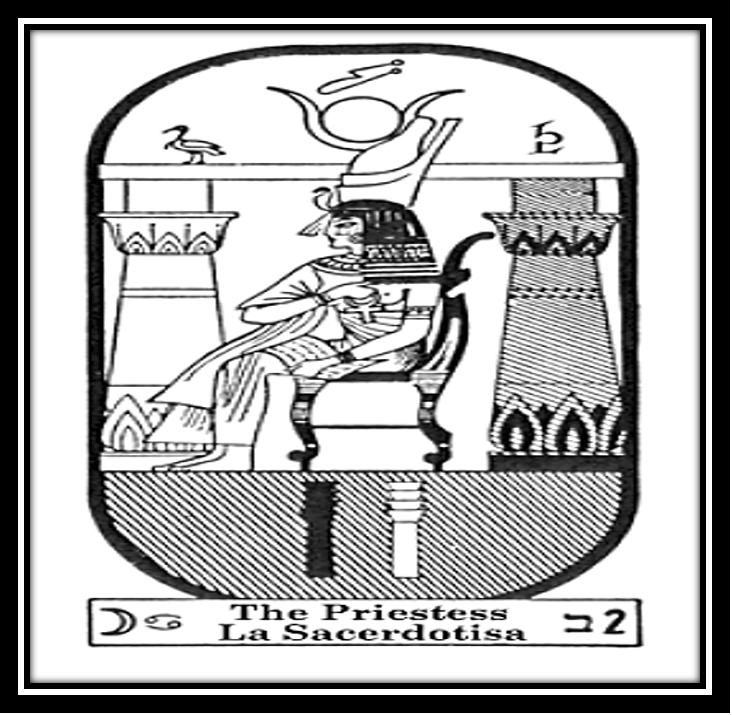 “Tell us that if a woman possesses a strong will, she cannot fail to see the True Light and to obey it properly. It is essential however, that she should keep silent as to her opinions and projects. As it has been said that the world belongs to the silent ones.”

This card is also called, The High Priestess. It is associated with the Sacred Feminine. She has been called The Goddess in Witchcraft, Shiva in Hinduism, The Devine Feminine in the New Age Religion, Mary in Christianity, Isis in ancient Egypt, etc. Many populations were expected to evoke her for support and for her divine interventions.

Alchemy is associated with this card also. Alchemy is a branch of esoteric science that involves the process of purification. This can be physical, spiritual, the mind or material elements. The goal is to bring a state of perfection by using knowledge in certain aspects of life. Sex between feminine and masculine is considered alchemy.

The connection between feminine and masculine is seen as powerful. In ancient times, the female would initiate sex with the male. Some rituals were observed, such as bonding. It was a less patriarchal time. This was because, at that time the female had the choice who to mate with and decided the attributes of the next generation.

The feminine and masculine can also connect spiritually. This was also initiated by the feminine. The feminine is passive and represents wisdom. The masculine can be the action of that wisdom. It is a strange link that feels like a mix between intuition and empathy. This depends on the strength of the connection or a spirit contract.

Symbology on the Card: The woman sits between two pillars. One is good, the other evil. The Crescent Moon is a sign that Truth is not visible to those who live in Illusion. In the hand she has across her breast she has the Christic Cross or Ankh. Below her other hand is a papyrus, half covered by her cloak indicates the Sacred Science (Alchemy) can only be fully known to the Initiate.

The head-wear above her head in the background has two layers with a container shape at the top. This contains the Light of intelligence and wisdom. She is seated to show that she cannot be moved through her own willpower.