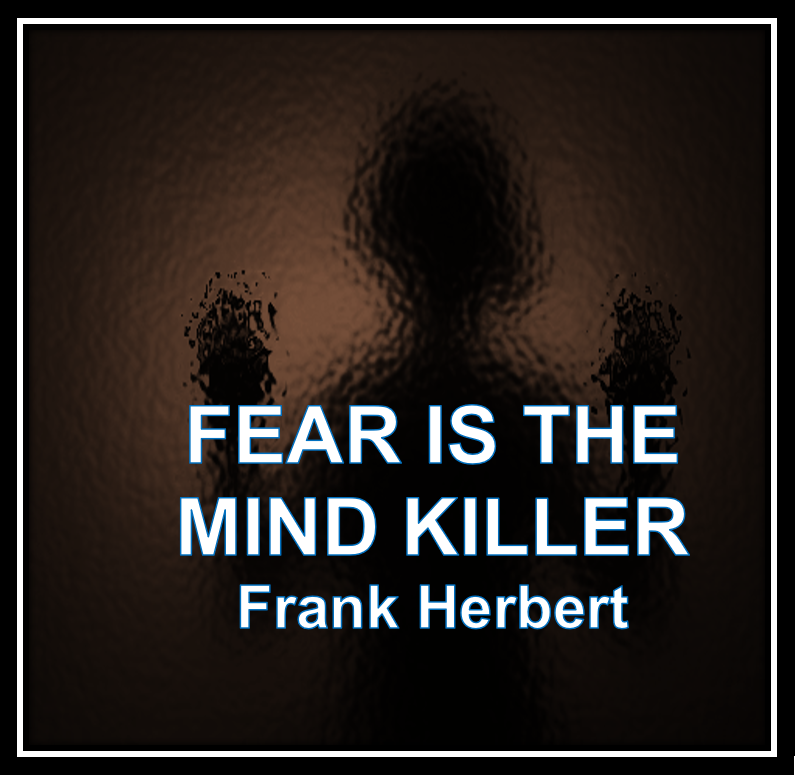 “Fear is the Mind Killer.“

Fear is of second density. It is where one can be irrationally afraid of the unknown or of what can happen in the future. It can be mistaken for true instinct where it is really a threat based on visual danger or a “knowing” of a future possibility of harm. The most harmful part of fear is it’s use as a weapon by those who are trusted by the masses.

With the amount of information now available, it is the Ruling Classes who use fear as their main tactic, through people in their politics and media departments. Fear works where use of force cannot reach. It can keep people on a very low thought process. A basic of “fight or flight” mentality. One must break through fear in order to awaken.

The quote by Frank Herbert comes from his book called, “Dune”. The character, Paul Atreides was going through his training and to put his hand in a box. The test was of the mind. A person who recoils is bestial. A person of higher consciousness goes through the suffering. The suffering of this world seems to affect those most human.

The test was to show what being a human is. Many think we are advanced animals. This test proves otherwise. “You’ve heard of animals chewing off a leg to escape a trap? There’s an animal kind of trick. A human would remain in the trap, endure the pain, feigning death that he might kill the trapper and remove a threat to his kind.”

The quote was actually a litany to be recited. “I must not fear. Fear is the mind killer. Fear is the little death that brings total obliteration. I will face my fear. I will permit it to pass over me and through me. And when it has gone past, I will turn the inner eye to see its path. Where the fear has gone there will be nothing. Only I will remain.”

There are four barriers to gaining knowledge. The first is to overcome fear. The second is to overcome the clarity of mind. The third is to overcome power. The fourth is to overcome old age. This is where one comes near to the end of the Journey of Life. One can delay the inevitable only for so long, but to gain a True Identity, is enough.

The emotion of Fear has had major implications on the evolution of humans in regard to civilization. Most people act of fear, rather than care. To submit to fear gives the aggressor control. Many people police themselves and bring limits to how they live through fear.

< THE NINE
> THE NINE VIBRATIONAL STATES